The Art of Working with an Artist

Artist Eleanor Carlingford has a collection on Art Pistol filled with expressive works that are rich in mood, combined with a focus on identity. Some of her pieces include work on the Celts, marrying in an element of history and tradition, and all are particular to Eleanor herself – so what happens when you introduce another artist into the mix?

Eleanor opened up her artistic world to us and told the story of her research trip to Italy – a trip that she shared with artist Jill Carter. She explains that she met Jill in an “odd way” and the two connected after Jill e-mailed Eleanor saying “I like your drawings, I think artistically we have a lot in common”. Eleanor and Jill spoke of how they both worked and ended up embarking on a shared artistic experience – not something that all creatives would happily do. 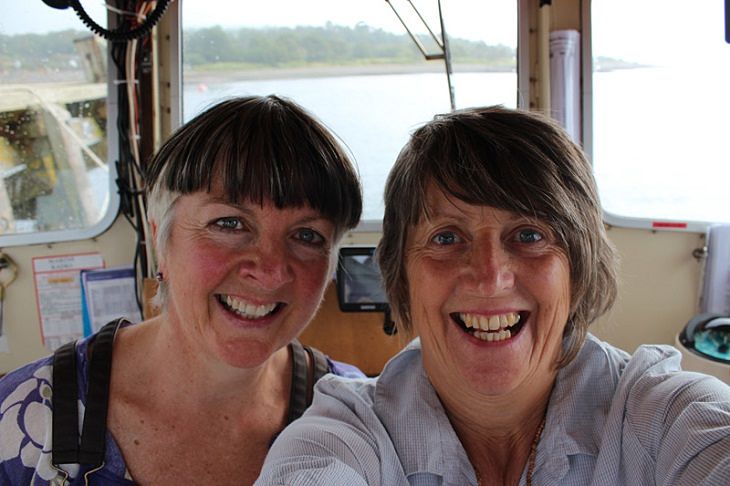 “We met up for tea and cake and realised we had a great deal to exchange about our work. Some artists don’t talk about their work processes, we did. Jill subsequently won a travel bursary to Italy for an Art Trip and just about that time, I had an offer of a house in which to stay in Italy, so, obviously I invited myself on Jill’s trip!” And the rest, as they say, is history. 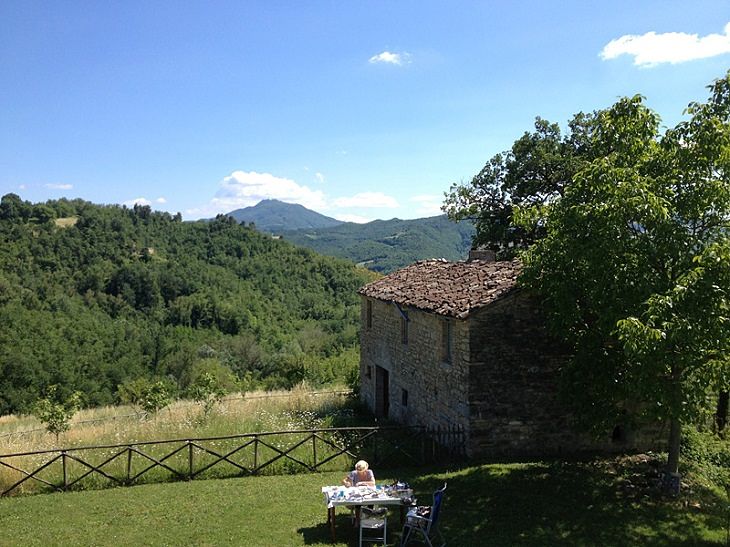 Eleanor working by the house

The two artists had made a clear connection through their work and shared the ideal of a “story” in their art. Eleanor explained that they both, “make and draw in order to find out and dream into a story”. A whimsical approach established the Sybils soon became the focus of the trip.

“We heard that the Sybils had been inspired women who lived in the mountains of The Marque region on Italy where we were going to stay. They had been soothsayers, storytellers and had predicted the birth of Christ amongst other things. So this was a starting place for our work”.

As well as both having the same vision when it came to stories and the Sybils, Eleanor also talked about how the pair worked together, using a table in the garden of their Italian home and making sure it was covered from head to toe “protecting it from every conceivable happening our artistic proceedings might involve.” They found similarities in this way, also discovering that the two of them were “both very messy”.

However, where there are similarities there are also differences. Jill described their first foray into joint projects as they made dolls inspired by the Sybils,

“Jill made a doll too – hers much softer and more womanly, mine a bit wild and loud. Jill’s was formed on a fabulous brush bought in a local market. Jill painstakingly stitched into her doll. I wildly cobbled mine together with wood and thread and names I saw on old Italian frescoes stitched into a skirt around the pitchfork legs”. 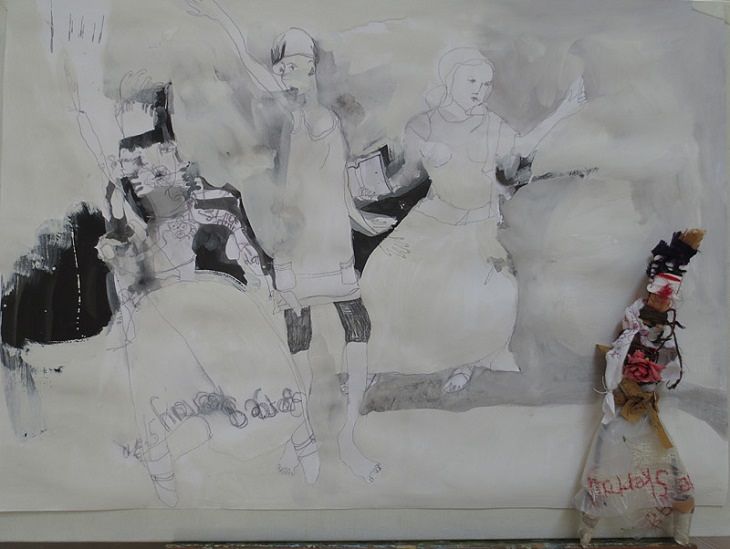 Doll bottom right in front of artwork in the studio

Although there had been similarities, artistic differences were not hard to spot from early on, tying in nicely with the themes of identity and story-telling. Each artist has their own story to tell, and their art is how they do this, giving each piece an individual flair and style that no-one else can possess. Eleanor explains it saying: “already our works were resembling ourselves and our own stories. This is the way in which art research evolves”. Subjects can be the same, but soon the individual stamp and personal story of the artist will start to emerge and evolve with the project – Eleanor’s work was “wild” while Jill’s was “softer” and the styles can come to reflect the individual.

Despite, artistic differences we can always learn from watching others,

“I taught Jill Japanese woodblock printing, making printed images of our dolls and other artefacts. Jill taught me about how she works – a flippin’ kleptomaniac when it comes to collection – she was like a magpie, plucking up mementoes and trinkets throughout our experiences. Surprisingly, my collections need to be more sparse otherwise I get visual overload”.

Jill’s collecting habit could prove to be a good skill to have as Eleanor explained what’s in an artist’s toobox: “Artists need stuff. People are inclined to believe that we have huge imaginations. This is actually not the case, there is very little in our heads. What we as artists are adept at doing is making, collecting, drawing and recording, and above all, making connections to bring together threads of a theme.” The process that Jill describes, the “collecting” and the “recording”, are part of what gives art an individual stamp, an identity akin to that of the artist’s, “All this ‘stuff’ is processed though ourselves (autobiography) and spat out the other end in the form of work.”

Everything that the two artists needed was waiting to be found as they scoured the Italian countryside, joining the dots for the story of the Sybils and each coming up with something unique – however this doesn’t mean that it was a trip that came without difficulties.

“All this time we were living together and I was doing the driving… we had to shop, cook and eat together. Am I painting a picture here…? All this was hard going. I discovered we had very different tastes when it came to many things, including eating. The culmination came when – having consulted, I gleefully bought 500 grams of fresh anchovies. By the next day they had disappeared from the fridge, and I hadn’t even had a chance to open the box”.

The anchovies incident happened, not once, but twice, much to Eleanor’s dismay and she “could only conclude that Jill did not actually like anchovies”.

This begs the question, did personal preferences take back-seat to the artistic developments – as everything on the art side was working perfectly – “We were hesitant with each other when it came to challenge on the personal front. This was mainly, I believe, because the creative side was going so well, and we were both dedicated to that aspect”.

You can be as dedicated as you like, but things never run smoothly and on the hunt for the Sybils Eleanor and Jill found that many churches in the region were locked, eating up a lot of their time searching for the key-holder and even having to return another day on some occasions. Even when they did get in it wasn’t plain sailing.

“This was a bit stressful as we wanted to sketch and mess around in a semi-creative way, and it is difficult when a custodian is mutely standing guard.”

The pair scoured the churches of the region coming up with everything – even “St Lucy with her eyes in the palm of her hand – close, but no cigar” – on the chase for the wise woman of Italy. However, again, once they successfully located their inspiration – and been mightily impressed by what they found, – things were a little more difficult than expected.

“When, finally we discovered paintings of the Sybils themselves on the ceiling of a church we were beside ourselves with excitement. Not only was it proof that they had existed, but they were fabulous women who had impressed the Catholic Church hierarchy sufficiently to have images of themselves painted on the ceiling of Santa Maria Maggiore in Spello – more elevated than saints and deceased bishops. Furthermore, the women were beautiful, sexy, young, attractive and well dressed. I lay on the floor of the chapel to draw them, but the brusque Italian attendant was having none of that!”

The trip came to its conclusion with a joint exhibition in Trasimeno, in a studio of a deceased artist that they had hired for the week. Just as had happened from the beginning, each artists work was unique and individual to their personalities, telling their own story on a matching muse.

“We curated our work in silence, immersed in the subject matter and our individual interpretation of it.” Although each outcome was “individual” it had started as a joint project and collaboration could be seen in some aspects of the final exhibition: “We had a sound installation where Jill had recorded me singing one of my own songs in a deserted basilica – a rare opportunity”.

And so the research trip came to an end and the artists that shared the creative space had learnt that sometimes, personal preferences may have to take a back seat where art is involved – not everyone can eat 500 grams of fresh anchovies – but Eleanor did describe what she had got out of the Italian adventure.

“And so I incorporate the story of the Sybils into my own life experience and as a result I cut and paste images from our trip with elements of my studio work. Plenty of work has yet to emerge based on my 3 week Italian sojourn.”

Eleanor also currently has some work in our Cresswell Lane gallery, following the theme of “personal identity. How we develop a sense of who we are and how we function in the world”.

“The images in the gallery at the moment are images of a nautical world seen through the eyes of a young figure. It is as if a young person had been placed in a boat, with the nautical journey a metaphor for the journey through life. The child is overwhelmed in this world with his/her surroundings, intrigued, excited and bewildered by turns – making progress forward through tides, undercurrents and moment of being becalmed. In life, do we have an inner pilot – or are we guided by external lights and beacons? The similarity with all our life stories is extensible.”

Pop down to the gallery or have a look on the website for a selection of Eleanor’s work.