Ever wondered what the highest amount of money someone has paid for an artwork at auction is and what it was they bought? Well wonder no more because here is a list of the top 10 most expensive works ever sold.

“I was walking along a path with two friends – the sun was setting – suddenly the sky turned blood red – I paused, feeling exhausted, and leaned on the fence – there was blood and tongues of fire above the blue-black fjord and the city – my friends walked on, and I stood there trembling with anxiety – and I sensed an infinite scream passing through nature” Edvard Munch 1982.

Edvard Munch tops the list with his dread inspired painting ‘The Scream’ (right). It went for a mere US$119,922,500! I almost don’t need to say it, but what the heck. The irony – I wanna scream! That’s £74 million for the pound users amongst us. And typically, Munch was so poor at the time he produced the infamous work he couldn’t afford to buy canvas. He created the image with pastels on cardboard. Makes me wonder where the next £74 million piece of cardboard lies.

New York auction house Sotheby’s made the record breaking sale in May this year to an unnamed bidder, seemingly impervious to the current economic climate. That’s some amount of money. Especially for an image portraying what could be interpreted as a rather camp character sarcastically emulating Madonna’s Vogue video as the sun sets over a sleepy Norwegian fishing village, “oooh oooooh”, vogue, vogue, vogue…and not one desperately battling a repressive fear of the certain end. I’m not sure the Homer Simpson version of the event was so woefully depressing!

So who is next in the top 10? Surprise surprise, it’s Pablo Picasso. ‘Nude, Green Leaves and Bust’ (below) was sold in 2010 for £66 million by rival New York auctioneers Christie’s. That’s not bad for what was a day’s work. £8,250,000 an hour to be precise, because Picasso seemed like a straight up 9-5 kind of guy. I wonder if the 17 year old girl whom he fell so madly for could ever have imagined someone would spend so much to gaze upon her beautiful face and sensuous body – note, ‘Picasso Goggles’ required. On approaching her he apparently said “I am Picasso! You and I are going to do great things together.” If getting somebody to part with an inordinate amount of cash on a painting is a great thing, then hats off my man! 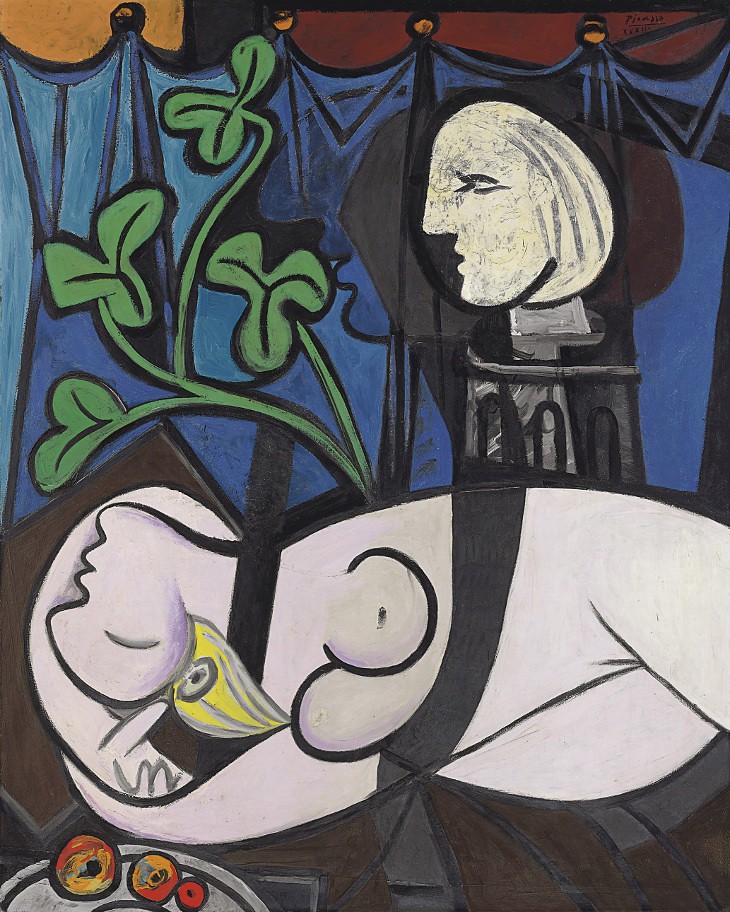 On the podium receiving bronze, after what can only be described as a spectacularly tight finish at the gavel, is ‘L’Homme Qui Marche’. Maybe if all six of Alberto Giacometti’s men had competed we would find him taking gold. Apologies, the Olympic hangover still looms. The Walking Man bronze work reached £65 million when it was sold in 2010. Is the determined figure walking to his nearest Credit Suisse one has to ask…

Picasso appears again in 4th place with his painting ‘Boy With a Pipe’. One of his earlier works, it raised £64 million at auction in 2004. Stick that in your pipe and smoke it!

And at 5 its Gustav Klimt’s ‘Portrait of Adele Bloch-Bauer II’, which went for £54 million in 2006. It’s still a mystery whether it was Adele or Gustav or even both who were members of the Community Restoration in Progress (CRIP) gang, but you can’t deny the obvious placement of Adele’s left hand.

In 6th it’s Francis Bacon’s ‘Triptych’, which sold in 2008 for £54 million. I can only assume the buyer skulked off after scoring this great ‘three for the price of one’ deal before anyone noticed!

A Qianlong dynasty porcelain vase is in 7th place. It sold for £53 million in 2010 – “I’ll take a hundred layers of bubble wrap with that please Mr Auctioneer”.

Vincent Van Gogh is in 9th place with his ‘Portrait of Dr Paul Gachet’. This painting sold for £50 million in 1990. Should this be ranked higher if we were to take inflation into consideration? Hmm, seems like a bit too much work.

And completing the top 10 we have Claude Monet’s ‘Le Bassin aux Nymphéas’, which was sold in 2008 for £40 million. A superbly serene scene to close with.

It must be nice bidding for art when you have a 6-figure wallet in your pocket! Although it certainly narrows the search selection down. I’m not sure if this extremist approach is required to secure something you really love. I know my offers will never be in these leagues simply because they don’t need to be. So why not join the party and ‘Make an Offer‘ you can afford on Art Pistol!