We all dream of winning the lottery and buying our own paradise island, don’t we? But Sam Caldwell, a graduate artist, as gone one step further and has created his own set, the Cairnsbruck Islands. Although they’re not perhaps the most idyllic, they still give you the sense of travelling to somewhere that’s just a bit different, with their own set of rules and inherent culture.

The collection, built up of small pieces, shows the almost dull everyday life on the fictional, northerly islands in gloomy watercolour paints. And Sam chatted to Art Pistol all about the inspiration behind the imaginary islands and what’s next for him in the art world.

AP: What’s the inspiration behind your work?

SC: My most recent body of work is inspired by a fictional group of islands which I have been trying to populate and record the history of. I call them the Cairnsbruck Islands.

How would you describe your work to someone who has never seen it before?

I often tell people that I make small watercolour paintings of grumpy looking people in pubs. I’m not sure that entirely covers it, but it seems to give people a sense of what I do! 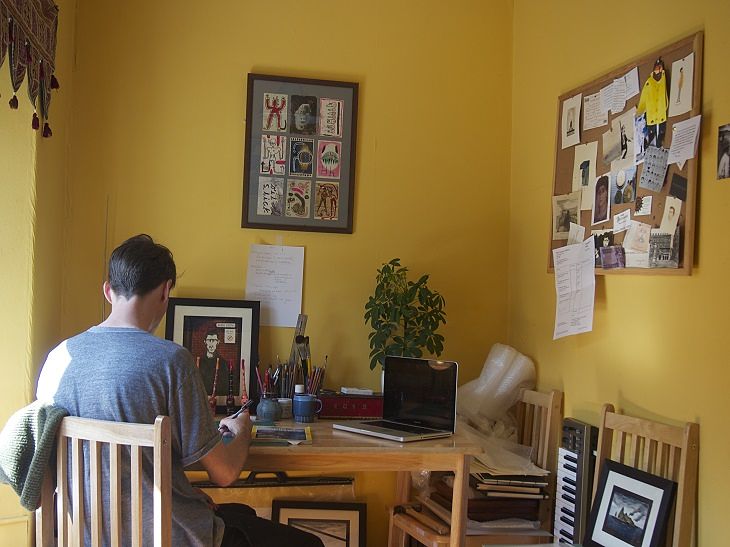 What is it about island life that interests you?

Some of the times when I have felt my most inspired have definitely been on boats heading towards islands. I don’t really know what it is exactly, but that experience of leaving the mainland and travelling somewhere which often seems to be another world really excites me. I think that islands have a lot going for them conceptually as well. They’re often these extreme microcosms of geography, weather and society, which seem to breed eccentricity. As someone who has only ever visited these places as a tourist I’m perhaps guilty of romanticising island life. This is part of the reason I chose to invent my own islands, rather than trying to document real places. 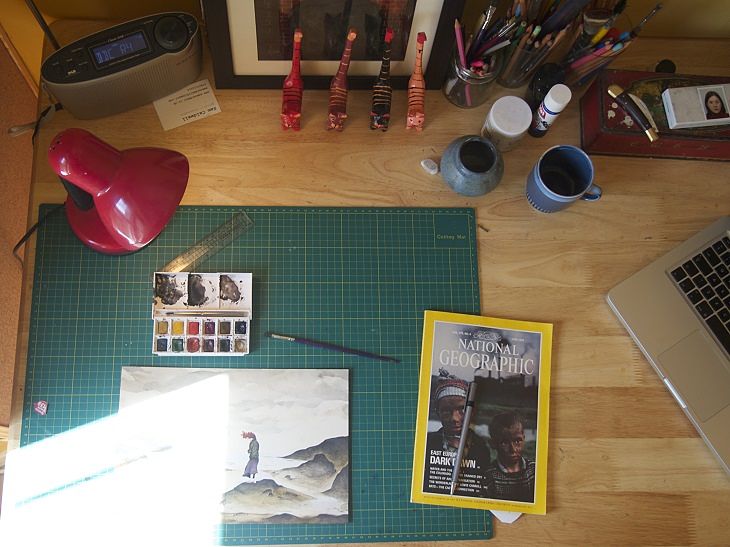 Does each piece have a story in mind?

Each piece is intended to sit alongside one another and tell the larger story of life on the Cairnsbruck Islands. Sometimes I make comics or pieces with a prescribed narrative, but more often than not it’s an atmosphere which I am trying to create. I like the idea of the viewer conjuring up their own stories.

How do you pick your subjects? Are you looking for a particular mood or emotion?

The characters that inhabit my work are often inspired by photographs; I’m particularly inspired by Social Realist photographers like Tom Wood and John Bulmer. Sometimes they are based on people I pass in the street or see in cafes and other times they are completely invented. There is definitely a recurring mood throughout my pictures, but I wouldn’t say that it’s necessarily an intentional thing; they just seem to end up that way!

Talk us through the process of creating a piece.

I will usually start with a couple of images I have found in an old National Geographic or in a book online somewhere. I’ll faintly sketch out some kind of composition and then start building up layers of watercolour. I add most of the details and shading in with graphite and then use a spray varnish to flatten the picture and get rid of the graphite shine.

What are your plans now that you’ve graduated?

I am moving down to London next month with my girlfriend and a couple of friends. Hopefully I will find some places to exhibit and sell my work!

Do you have any fears and what are you looking forward to in stepping out on your own away from University?

I am excited about setting up a home studio and trying to get into doing some more illustrative work. My biggest worry at the moment is how the move down South will affect the kind of images I make. Everything I have made over the past four years has been inspired by Scottish landscapes and a sense of Northern-ness, so it’ll be interesting to see how my new location affects things.

So far what has been your toughest challenge and biggest achievement in connection to your work?

The toughest challenge so far has been installing my degree show. I built a kind of ramshackle hut, which was filled with my paintings and drawings. I can also say that it was probably my biggest achievement too!

What are you working on at the moment?

At the moment I am working on some new painting for an exhibition in Suffolk next month. I’m also getting together some pieces for a show at the RSA in January with the Royal Scottish Society of Painters in Watercolour.

Sam’s work showing island life in the imaginary Cairnsbruck Islands in hanging in the Cresswell Lane gallery – and it will soon be available online as well.