Iasonas is a self-taught Greek painter, illustrator, photographer and graphic artist. Enjoy his paintings and illustrations on Art Pistol, and look forward to seeing some of his latest digital art, which we’ve been lucky enough to see, some time soon!

Art Pistol (AP): What’s the first thing you can remember painting?
Iasonas: At about the age of five; it was the side view of a big ship in the centre of a paper, sparkling and fully ornate with lamps, with many circular windows, floating in happy waters, surrounded by lots of birds and of course, a shining sun.

AP: When did you first realise you were an artist?
Iasonas: Allow me to say that I believe everyone is born an artist as everybody has shown artistic abilities even once in his youth. The basic principles of aesthetics and creativity are natural born qualities in every human being; therefore, these qualities enclose the possibility of a lifetime duration regardless of the profession one may choose. The question is when (and if) one will come across this so called ”artist’s necessitation”. I’ve always been creative, but if I am to recall a more particular moment, it was in 2007. I was working on a small solo exhibition project, about to show some jewellery designs and I had to figure a proper way to display them. So I thought of painting some human figures onto large scaled pieces of fabric to hang the jewellery on, which I did. And that was it; such a whole different sense of artistic perspective, variety and depth of expression was attached and available to this medium that I just didn’t want to stop. It was all about the freedom in it.

AP: How would you describe your art to someone that has never seen it before?
Iasonas:  Symbolic. Often with a vague bittersweet sense of irony. But I would try not to give any description. It has to be seen. You know, to describe your art is as awkward as to explain how you’ve been feeling yesterday. And there’s no such thing as ‘a successful description of an artwork’; when there is, something is not successful with the artwork. Who’s up to describe emotions and thoughts efficiently? Art can only be subjectively described and I think that’s the purpose of it. Once an artwork is finished, thence it belongs to its viewers and to their subjective perception.

AP: Is your work on any famous person’s wall?
Iasonas: Well, I wouldn’t call it fame. It has met some good success in Greece though, including art spaces like IANOS Art Space which is currently exhibiting some of my work on a permanent basis and private collections of some highly regarded people.

AP: If you had the opportunity to change something in the art industry what would it be?
Iasonas: Nothing. I think it works perfectly as it is. The actual levels of emptiness that the art industry supported so far have gone so high up that we’ve been finally able to distinguish the true artist from the overestimated ones, by putting them all together, to identify the investors amongst the lovers of art and the most important of all, motivate our creativity… As art always reflects society, I would say that both art and society now are suffering from conceptuality; too much thinking.

AP: Do you have any other interests or talents that you’d like to share?
Iasonas: I would have to say the only talent I’ve got is my humour, as a friend says.

AP: Describe yourself in 3 words, one has to be a colour?
Iasonas: White, Greek, Lovely.

AP: Tell us your perfect scenario for painting.
Iasonas: Plus feasible? A Cycladic island, sunny summer weather, would love listening to Chopin, Blixa or the Specials, but any good music and coffee should do. And cigarettes.

AP: If you weren’t an artist you’d be..?
Iasonas:  I’ve really not the slightest idea. However, I have been working as a disc jockey since I was 16 and I am really having fun with it. I’ve also done a lot of serious thinking opening an art space or open studio for artists that could also serve coffee and alcohol, but life has its own way of sorting things out.

AP: Do you have any advice for artists just starting out?
Iasonas: Work hard to trust nothing more than your instict. Create like you’ve been hired from God and with respect to human nature. Art should be considered nothing more or less than a very serious game. At the end of the line, it’s all about freedom and a shared path back to childhood.

AP: And finally, what are you working on just now?
Iasonas: I am working on a photography project, which has got me really excited and also on a new series of ink & paper illustrations, being highly influenced by the Japanese printmakers of the 18th and 19th century. This is a picture from a series of illustrations that I’ve been working on a the moment; the series is entitled ‘Passport’. 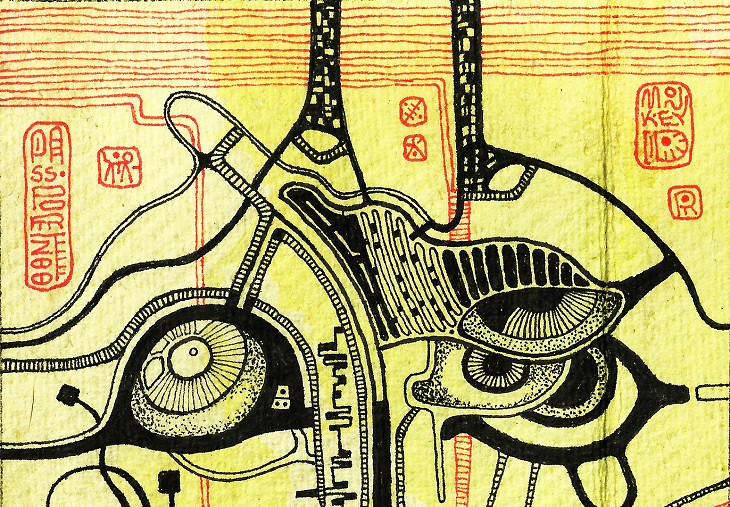