From Public Art to Gobbledygook – Giant Rubber Ducks, Fantasy Coffins and The Iconic Dalek – but are we allowed to ‘like?’‏

The start of this month saw a giant 54ft. yellow rubber duck float into Hong Kong’s Victoria Harbour to cheering crowds. Its journey started in 2007 and it has ‘travelled’ to 13 cities in 9 countries, among them Sydney, Auckland, Sao Paulo, Amsterdam and Osaka. It is the work of Dutch conceptual artist, Florentijn Hofman whose other work is a land based collection of inflatable art including a larger than life cockroach and a piece named ‘Fat Monkey’ made out of 10,000 brightly coloured flipflops. Hofman’s hopes for his art – to surprise people in their usual urban space, create the conversation piece and connect people to Public Art – and he seems to have achieved his aim with the people of Hong Kong who are turning up in droves to take a look – and the consensus? It’s fun, it represents happiness, ‘it puts a smile on our faces.’

And you can check out our website for some of Art Pistol’s Public Art projects that are stopping the traffic and bringing a smile to the streets of Glasgow. The Mural, A View from The Clyde, shows a fantasy underwater world where divers explore among Standing Stones and giant elephants and otters frolic alongside one of the most iconic of villains from the cult science fiction series, Dr. Who (50th anniversary this year), The Dalek.

Paa Joe is another artist whose work can raise a smile even at the saddest of times – he’s managed to put fun into funereal. Paa Joe aka Joseph Ashong is a 68 year old Ghanaian craftsman/artisan/artist who has been in the fantasy coffin trade for almost 50 years. His creations are highly intricate and take months to produce. He’s buried people in lions, aeroplanes, tanks and Coca-Cola bottles – whatever the link to the deceased, Paa Joe will hand craft the coffin to suit. He’s produced thousands of coffins over the decades and has had two U.S. presidents stop by his workshop. In 1989, former president and multi-millionaire peanut farmer, Jimmy Carter, visited his workshop and bought two coffins – speculations on his choice of theme/motif – perhaps two large peanuts, one for him and one for Mrs C. to be put into the earth from which peanuts, which made him a very wealthy man enabling him to become ‘Leader of The Western world’ are harvested!! 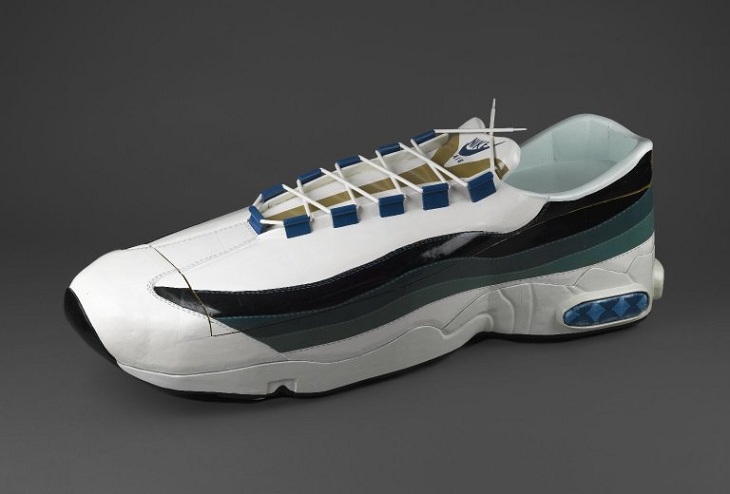 So we look at the Giant Rubber Duck in Hong Kong Harbour, the Giant Underwater Dalek mural on the Glasgow Clyde riverfront, the Fantasy Coffins in Ghana – we like, we don’t like?? Not as easy as that – it would appear that the use of the word ‘like’ is a bit of a no-no in the art world. Recently, Charles Darwent of The Independent spoke to a gifted young painter about his work – ”The two small pictures are particularly strong, I really like them.” Gifted young painter, (alarmed) “I’m not sure ‘like’ is a word that can be used in critical discourse these days!” Long ago there seemed to be no shame attached to ‘liking’ work that pleased but now you’d have to be using the art speak of I.A.E aka International Art English to make yourself understood. Three years ago David Levine and Alix Rule coined the terminology I.A.E. when trying to analyse the pompous, overblown prose, the’ ironizing’, the ‘deconstructing’, the ‘conceptualising’, the…waffle used in art critiques. Their findings were published last year as an essay in the American Art Journal, Triple Canopy, and have become one of the most widely circulated pieces of online cultural criticism. Levine and Rule say that I.A.E. always uses “more rather than fewer words” and that “ordinary words take on non-specific, alien functions”; I.A.E is “everything to do with English, but is emphatically not English.” So, are those of us in the art world who don’t manage, or want, to master this lingo destined to be forever bamboozled, left out in the cold? Levine and Rule think not, that the allure of this exclusive, excluding private language is fading. So common sense does prevail after all!