Drugs in Art – An Assumed Relationship

There has long been, both a true and speculated, connection between drugs and art on the creative scene, claiming that certain mind-altering substances can influence and effect artists work to staggering degrees. However, although this is an open relationship and is widely accepted by both the art community and those outside it – it does tend to beg a few questions; do people really use them to such a big extent? How much difference do these drugs make to the art work produced? Are those artists left incapable of working without them? Should they really be as accepted as they are…?

If drugs in art are viewed as enhancing the artist’s ability, could a comparison be drawn to performance-enhancing drugs? In the world of sport many athletes use certain substances to enhance their performance, from the perfectly legal supplements like protein to the career ending ones that have marred many sporting “greats” over the years, meaning they can achieve physical exploits that they perhaps could not have done without them. However, in sport they are banned – with a strict line being taken – as they are seen to be giving the individual an unfair advantage and natural skill has been taken over by something else. It is expected that everyone enters the competition on an even playing field and drug use is widely condemned.

It’s all about ‘enhancing’, in sport enhancing your natural ability with drugs is majorly frowned upon – even reputation and career destroying – but in art creativity-enhancing drugs are hugely accepted, if not expected and promoted. But, let’s remember art is a whole other world where an ‘even playing field’ is not something that’s taken into consideration and if drug-use has been involved in the process then this is something that’s generally widely known.

Drug-use is discussed openly on the art scene and the Maison Rouge in Paris once opened an exhibition entitled ‘Under the Influence – Artists and Psychoactive Drugs’ – drugs are definitely talked about in a different way when it comes to art. The collection was divided under certain categories – works with drugs in them, works that portray drug users and works that are supposed to make viewers think they’re in a drug-induced state.

This was not a new or ground-breaking exhibition and use or, in some cases, abuse of substances that can affect emotions and thoughts have been a major feature in art perhaps even before the turn of the 20th century. This is nothing new. We know that Van Gogh had a penchant for absinthe and when this is mixed with digitalis (a drug prescribed for his epilepsy) it can make you see the colour yellow more prominently – hence The Yellow House Painting (pictured below) and Sunflowers, amongst others. 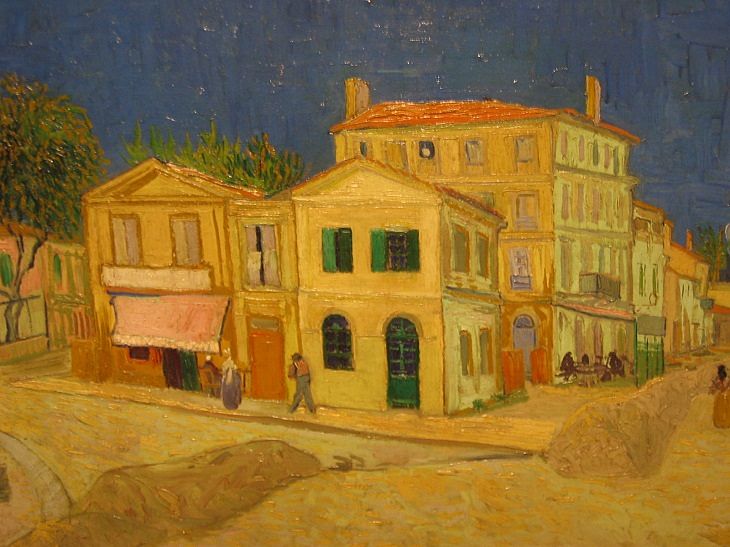 But why use them? Many have claimed that drugs allow them to ‘see more’, enhancing their creative potential and allowing them to open their minds to visions that can influence their work. With certain substances artists have said that the world becomes a new place. They want their work to interest people, to excite and this may take more than the everyday black and white world. Everything is thrown up and shaken about and artists are given more to work with – more to gain attention with, something different.

It has been said that the mind-enhancing drugs don’t make you creative, but they more enhance (back to that word!) the creativity that you already have. They can alter the way you see and experience things around you. However, on the other hand, many have argued that these substances simply allow them to take a break from their busy, ‘tormented’ minds so that they are free to work.

Harvard art students were asked about their drug habits, with one replying: “I oftentimes smoke marijuana before going to the seven hour VES classes or before I work on a piece… but less for creative inspiration than for getting the mind and body into a sort of mode for allowing the creativity to come. It helps you not get fixated on a certain idea or colour and allows a little more flow in the creation of whatever you’re making”. (www.thecrimson.com)

For many, it seems that drugs don’t allow for creativity, they just loosen you up and allow you to be braver and have more confidence, allowing your creativity to “flow” more easily. Art is all about artists laying out their vulnerabilities, to be judged and critiqued by others, and the sense of loosening aids this. Ideas can be grasped more easily; these – often unique – ideas are then able to be seized more easily and translated into something solid. Drugs could merely be seen as another instrument in the paint-box – a new brush might improve your work, a particular drug might allow you to apply yourself better.

It is apparent though that the students that were spoken to were aware that you shouldn’t rely on the influence of drugs as your sole inspiration, understanding that skills may not be represented in their full potential. Works that have been created whilst ‘under the influence’ still have to be scrutinised afterwards, when sober, then revisions and edits can be made. Drug art-work will never be consistent; it perhaps only makes the individual feel more creative, when in actual fact they’re not really.

All of this can be interpreted as being very cliché though. Not all artists are tormented and need to escape the inner turmoil’s of their minds, not all artists use drugs to ‘enhance’ themselves and their work – but drugs do affect artwork and this is no more apparent than in Bryan Lewis Saunders latest work.

Saunders embarked on a mission – a drug adventure – in which he drew a self-portrait every day whilst under the influence of a different drug each time. The outcome is sometimes scary, sometimes funny, often intriguing and every now and again amazing – and they are all pretty different from each other. Bryan is an artist who used drugs specifically to influence his work and as a way to see the world in a new way: “After experiencing drastic changes in my environment, I looked for other experiences that might profoundly affect my perception of self. So, I devised another experiment where everyday I took a different drug and drew myself under the influence.” (www.bryanlewissaunders.org)

Saunders even proclaimed that he strongly dislikes drugs, but did what he had to for the sake of art: “He says he hates drugs, but feels obliged to try new ones, just for the drawing”. (www.theguardian.com) Bryan needs to use drugs for his creative project – but this is a little different and is a project that honestly lays out the use of drugs in the artwork produced and the effects are evidently seen. It isn’t an interest in mind-altering substances that Bryan is harbouring it’s just an interest in the subject matter, questions of drugs role in art have been asked for decades and here it is laid out, drug by drug. What may also be interesting to note is that Saunders only became popular and noted in the art world after this experiment…

There will always be questions left unanswered when it comes to drugs and art, even though they are, in a way, accepted on the art scene, as creatives are always looking for ways to explore. However, you can never know too much about an individual and what journey they have been on with regards to drugs and art – some have never touched anything and can produce mind-blowing masterpieces (let’s not brand everyone with this stereotype), others can come to rely on them as a creative crutch with it sometimes taking a sinister turn. It is a relationship that is intricately linked and is most likely to remain this way for many years to come.