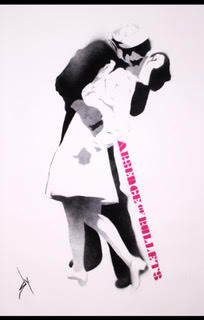 The Absence of Bullets

In one of the most famous World War II-era photos, a sailor holds a nurse, bends her over, and kisses her in Times Square. The image was featured in Life magazine in 1945 and soon earned a permanent spot in the nation’s consciousness, having been re-created at Fleet Week in NYC for decades. Glenn McDuffie, the man believed to be the sailor, died on March 9 in a nursing home in Dallas. He was 86.

Glenn’s legacy is once again grabbing headlines as the nation remembers the moment that defined an era. According to Glenn, he met the nurse after he heard that Japan had surrendered. He was just 18 years old at the time. “”I was so happy. I ran out in the street,”” he once told the Associated Press. Although Glenn had plans to see his girlfriend in Brooklyn on that fateful August day, his enthusiasm took over when he locked eyes with the nurse. “”She saw me hollering and with a big smile on my face,”” he said. “”I just went right to her and kissed her.””———
Urban art by Sly…….And in your home for the price of a poster.

Buy some original art done just for you. Spray stencil paintings are the thing and these are just the ticket. They are definitely not prints as each is individually sprayed onto stiff paper and then signed (so consequently will vary a little from the illustrated picture). They are ready to hang with crossbars and nails which can easily be removed if alternative framing is required.

Street art in your own home by Cult Artist Sly. Joke prices for these pieces! The artist has exhibited at the Saatchi alongside the likes of Banksy, Terry O’Neil, Tracy Emin and Vic Reeves and now has a permanent collections at the Cut-Up in Germany, “”Outside the Square”” opposite the Tate and other galleries around the globe. Get an original while they are still affordable. You have been warned.

We can custom frame all artwork, so let us know if you’d like to discuss options and see samples. Get in touch.

Free UK delivery applies to standard delivery in mainland UK. Additional costs apply for delivery outside of the UK. For example most prints will ship to the United States (US) for a flat £20 fee. Full terms here.